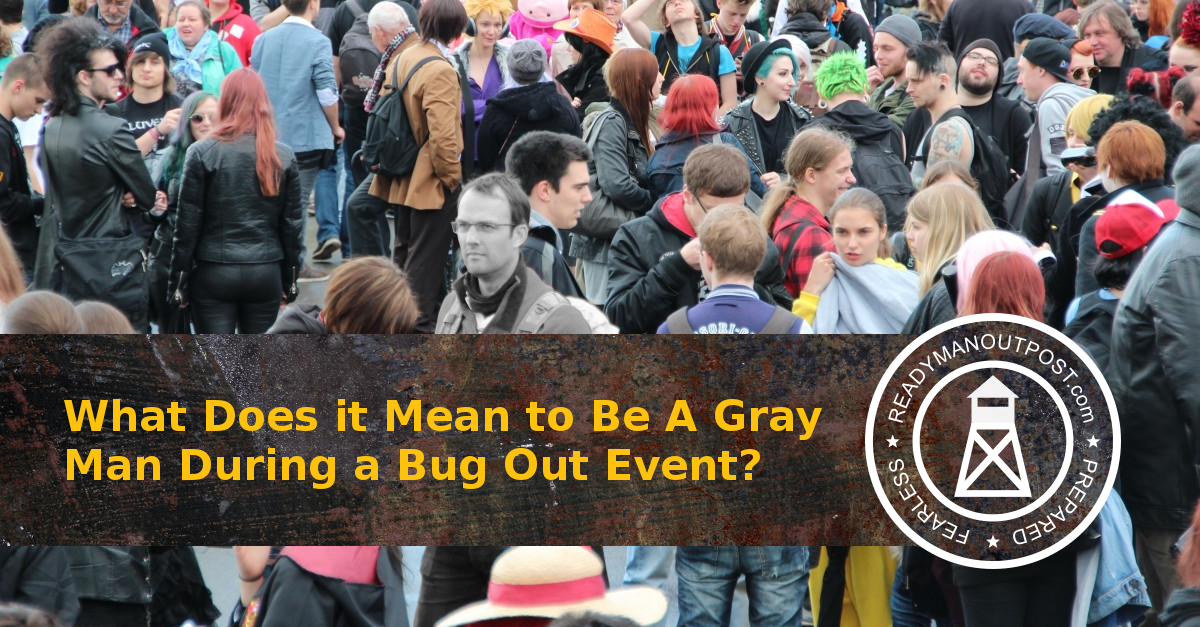 You might have heard the advice that you should make a good first impression. That’s great advice – except when it comes to a bug out event. During the time when you’re bugging out, making an impression could cost you your life.

If you look at a crowd of people, you’ll notice that some of them stand out from others. It could be because of their actions or how they’re dressed, their facial features, body marks or jewelry, what their voice sounds like, the color of their hair or their mannerisms.

They stand out because they’re noticeably different from the others around them. It’s not a good idea to be noticed during a bug out event. You want to be a gray man. That means you don’t stand out in the mind of anyone else.

The goal is to avoid making an impression. You can still move through a crowd and even speak to others, but no one will recall you once you’re gone. It’s as if you disappear from the thoughts of others.

A gray man has nothing about his clothing or his looks that can be recalled to mind. His hair doesn’t carry a shampoo scent. His clothes fade into the crowd. He’s not noticeable for his actions, either.

You won’t see him obviously checking the people around him or the area. A gray man isn’t recognized because nothing he wears, does or says is worth noticing. That’s how other people miss observing a gray man.

Act Normal and Blend Into the People Around You

He doesn’t look like he’s focusing on any one person, thing or place. None of his actions will be anything that anyone will pay attention to. It doesn’t mean that you’re not on alert. You just don’t stick out.

To be a gray man, you have to pay attention, stay calm and journey slowly toward your end goal. You don’t push other people out of your way. You move at a regular pace – not hurried – like you have nowhere to go and nothing to do.

Hide Features that Stand Out

A gray man makes sure that his face doesn’t stand out. If there’s something definable about his hear, he wears a plain ball cap. If he has arresting eyes, he wears sunglasses.

He makes sure that any distinguishing marks like scars or tattoos are hidden from view. He keeps his voice calm. His mannerisms are bland. He doesn’t interject emotion into his words when he speaks.

The person who is a gray man is one people don’t notice because to them, he’s not doing anything and he doesn’t look like anything worth noticing. He triggers no reaction within them, which, is what allows him to be safe during a bug out event.

Physical Fitness Prepping for a Bug Out Scenario

7 Life Saving Survival Skills for a Bug Out Situation

It's here... you suddenly find yourself thrust out of your routine day and smack in…

Picking the Best Bug Out Location

"If You Fail to Plan, You Plan to Fail" First of all, you need to…

Get INSTANT access to my FREE SURVIVAL GUIDE
Will you know exactly how to protect your family?
LEARN HOW
Copyright readymanoutpost.com 2023 - All Rights Reserved
Back To Top